Kazan Arena Set Up a Stage for WorldSkills Opening Ceremony 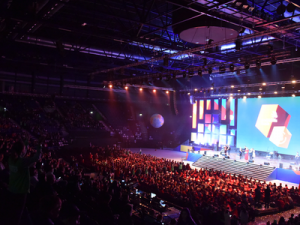 OREANDA-NEWS At the Kazan Arena football stadium, a stage has been set up for the opening ceremony of the World Professional Skills Championship in accordance with WorldSkills standards. The sports facility was visited by the mayor of Kazan, Ilsur Metshin.

“There are two new technologies that we have never used anywhere. The image on the screens of the monument we reproduce online. Five VR artists were invited from all over the world/ For them there is a separate scene. Artists in VR glasses will draw on the screens, and the image will be transferred to the pyramid,” he noted.

He specified that the spectators themselves will be able to participate in the show.

“For the first time at a stadium with a capacity of 45 thousand people, we give each spectator the opportunity to participate in the performance and we ask the spectator very important questions about their future. And people in the stadium answer these questions. As a result, we will see the percentage ratio - how many viewers answered yes and how many answered no,” the director said.