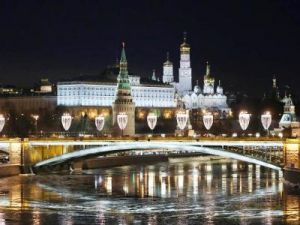 OREANDA-NEWS. Lights on the Kremlin and 2.000 buildings in Moscow will be turned off as part of the international environmental campaign “Earth Hour” on Saturday at 20.30, according to the World Wildlife Fund (WWF) of Russia.

“This year lights on almost 2.180 buildings in Moscow will be turned off for an hour”, the WWF said.

As before, the lighting of the architectural ensemble of the Moscow Kremlin, the Cathedral of Christ the Savior, the “Luzhniki” Stadium, the Bolshoi Theater, the State Duma and the Federation Council, the Ostankino Tower, and sports facilities will be turned off for an hour.

It is reported that this year’s several more cites will join the action. These are buildings on Novy Arbat and Tverskaya streets, pavilions at VDNKh (Exhibition of Achievements of National Economy), 15 parks, including “Zaryadye”, which will host the main program of the event”, the message says. Representatives of the city economy complex of the Russian capital and WWF Russia will turn off the symbolic knife switch, turning off the decorative illumination of the capital's sights.

A year ago, about 28.5 megawatt-hours of electricity were saved during the global environmental campaign in Moscow. Then the main venue was also the park “Zaryadye”, where performances of animators and DJs took place. Global action was supported by the townspeople.

In total, the Earth Hour will turn off the light in 700 locations in Russia, said Yury Sochnev, Director of Communications for the World Wildlife Fund (WWF). The action will be held on the last Saturday of March, from 20:30 to 21:30. The Kremlin has been participating in the global flashmob since 2013.

"Earth Hour" is an international symbolic event, during which you need to turn off the lights and electrical appliances for one hour, thus expressing non-indifference to the future of the planet. The purpose of the event is to attract people to the problem of climate change, light pollution and other environmental issues.