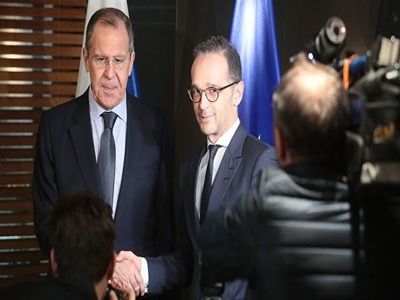 WorldDiplomatic organizationsMilitary securityInterstate relations
OREANDA-NEWS. Russian Foreign Minister Sergei Lavrov will hold talks on Wednesday with German Foreign Minister Heiko Maas, who is on a working visit in Moscow. As Russian Foreign Ministry spokeswoman Maria Zakharova said ahead of the talks, the parties will exchange views on the most pressing international issues, including the situation in Ukraine, Syria and the situation around Iran, as well as issues of global stability and strategic security. The ministers will also discuss the development of bilateral cooperation in the trade, economic, scientific, educational, cultural and humanitarian fields.

Maas will stay in Moscow until August 22. On Thursday, he intends to meet with civil society and youth. The foreign ministers of the Russian Federation and Germany maintain an intensive dialogue. This year the ministers have already met four times. The last meeting was held a month ago in Bonn as part of the Russian-German forum Petersburg Dialogue.

Contacts at the highest level are also regular. On the sidelines of the G20 Summit in Osaka on June 29, Russian Presidents Vladimir Putin and German Chancellor Angela Merkel expressed interest in further deepening bilateral ties, developing trade, economic and investment cooperation, and expanding cultural, humanitarian and inter-social dialogue. As emphasized in a comment by the RF Ministry of Foreign Affairs, in all these areas in recent years, visible results have been achieved.

In addition, as reported in the ministry, it's expected that Lavrov and Maas will discuss the situation in the field of arms control at negotiations. On August 18, the United States for the first time after withdrawing from the Treaty on the Elimination of Intermediate-Range and Shorter-Range Missiles tested a ground-based cruise missile with characteristics prohibited by this document.
Source: OREANDA-NEWS
Подписывайтесь на наши группы: Instagram | VK | Facebook | Twitter
Rate this article:
Print