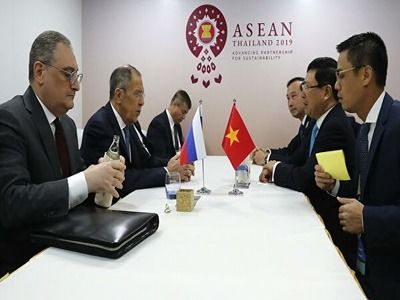 WorldEventsInternational activitiesInterstate relations
OREANDA-NEWS. The relations between Russia and Vietnam have reached the level of a comprehensive strategic partnership and are not affected by the external environment. This is stated in the greeting of the Minister of Foreign Affairs of the Russian Federation Sergey Lavrov to the participants of the Russian-Vietnamese industrial exhibition Expo-Russia Vietnam 2019. The text was published on Thursday on the website of the Russian Foreign Ministry.

“Vietnam is a long-standing and reliable friend of Russia in Southeast Asia. For nearly seven decades, relations between the two states have served as an example of equal, mutually beneficial cooperation, not subject to the influence of the external environment”, the minister emphasized. “Today, our relations have reached the level of a comprehensive strategic partnership. Its integral component is trade and economic cooperation, which shows steady positive dynamics".

According to Lavrov, the Expo-Russia Vietnam Forum has established itself as a sought-after platform for the exchange of information, meetings and coordination of joint promising projects. The head of the diplomatic mission noted that the exhibition was held as part of the Year of Russia in Vietnam and the Year of Vietnam in Russia, which "gives it special significance".