Maduro: Venezuela Has Become a Testing Ground for New Form of War 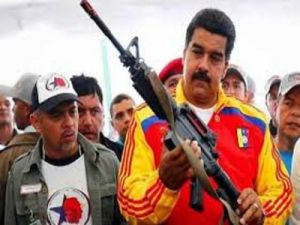 OREANDA-NEWS. Venezuela has become a testing ground for a new form of war using electromagnetic and cybernetic weapons aimed at the country's life support systems, the Venezuelan president said.

"Venezuela has shown the world that it has become a testing ground for new cybernetic and electromagnetic weapons, as well as for testing a new war strategy - and this is no longer a direct seizure, not a missile bombardment, but a" bombardment "of basic basic and vital services," the president said .

According to him, all this is done with the participation of "the worst opposition we have" during the years of the revolution.
Maduro also said that the opposition is carrying plans to kill him, as well as the head of the National Constituent Assembly Diosdado Cabello, and other government officials. In this regard, he stated that in order to oppose the plans of the opposition, he ordered the need for special vigilance to the intelligence and counterintelligence services.

"They (the opposition) are the main accomplices of this type of war," he said.
Large-scale power outages occurred throughout the country at the end of last week, the authorities explained this with new attacks on electricity supply facilities. The first major blackout occurred in Venezuela on March 7th.

Recall that even hospitals were left without light, victims were reported. According to the opposition parliament, at least 17 people died during the blackout. The BBC and other publications have reported numerous cases of supermarket robbery.

Earlier, the self-proclaimed provisional president - formerly the head of the National Assembly, Juan Guaydo, said that in the face of a general catastrophe, only humanitarian aid would save the country - as well as elections held with "international assistance."