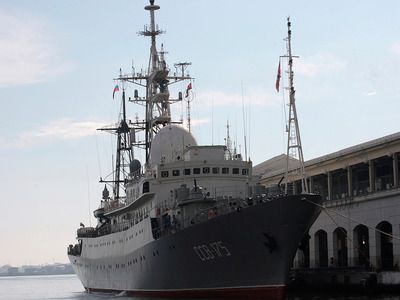 WorldInternet mediaMilitary securityWater transport and ports
OREANDA-NEWS. The Russian reconnaissance ship Viktor Leonov is off the east coast of the United States and makes unsafe maneuvers, CNN claims with reference to US officials. The channel’s interlocutors are worried by the fact that a ship moving in neutral waters along the coast of South Carolina and Florida doesn't turn on the navigation lights when visibility is poor and doesn't respond to requests from other vessels.

A U.S. Coast Guard spokesperson told CNN that teams from other vessels have already been warned of being off the coast of a Russian warship and its unsafe behavior. The channel indicates that Victor Leonov has been visiting the Caribbean for the past five years, and then runs along the American coast. In February 2015, Viktor Leonov visited the port of Havana the day before the talks between the United States and Cuba on normalizing relations. Washington then reacted calmly to the appearance of the Russian reconnaissance ship in Cuba, saying that this was not an unprecedented event.

In 2017, Fox News reported that Victor Leonov was spotted about 30 miles from a US submarine base in Connecticut. The US Department of Defense then indicated that they were concerned about this fact, but recognized that the Russian ship had not committed any violations and was in neutral waters.
Source: OREANDA-NEWS
Подписывайтесь на наши группы: Instagram | VK | Facebook | Twitter
Материалы по теме: