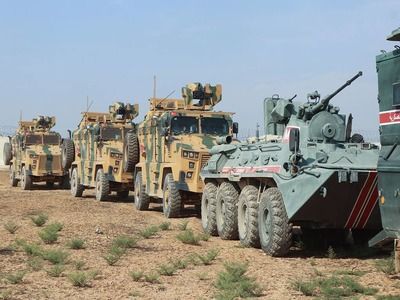 Media: Turkey and RF Discuss the Possibility of Conducting Joint Patrols in Idlib

WorldTerritorial administrationMilitary securityInternational activities
OREANDA-NEWS. Turkey and Russia are discussing the possibility of conducting joint patrols in Syrian Idlib to ensure security in the region. This was reported on Thursday by Reuters, citing a source in the Turkish government.

The agency’s source also confirmed that a meeting between Turkey, Iran and Russia on the situation in Idlib could be held in Tehran. However, Reuters does not note at what level contacts can take place. Earlier, the Turkish Foreign Ministry told the Russian media that representatives of Turkey, Russia and Iran are working to agree on the date of a tripartite summit on the Syrian settlement.

The previous - the fifth in a row - trilateral meeting of the presidents of the countries - guarantors of the Astana process of promoting the Syrian settlement took place in September 2019 in Ankara.
Source: OREANDA-NEWS
Материалы по теме: