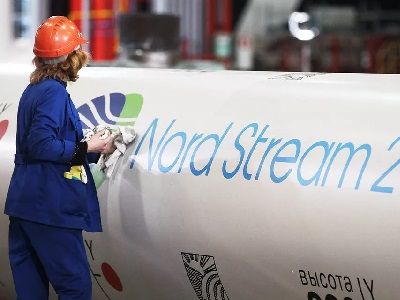 Merkel: Nord Stream 2 not possible without clarity for Ukraine

"I admit that I know about the critical opinion of the Baltic States. In Germany, the energy policy is diversified, we import gas from Norway, the Netherlands and Russia. We are faced with problems in the implementation of climate agreements, our need for gas will actually grow," Merkel said. “I made very clear that a Nord Stream 2 project is not possible without clarity on the future transit role of Ukraine,”

So, at the same time, Merkel stressed that Ukraine should remain a gas transit country. "We have Nord stream, we may be able to implement Nord stream 2, " she said.

According to the Chancellor, she hopes that the project of the Turkish gas pipeline will also be implemented.

"We assess this project as geopolitical, not as commercial or energy. Our view is based, unfortunately, on not very good experience. We know what it means to depend on one source of energy, from Russia," said the President of Lithuania.

Nord Stream 2 envisages the construction of two gas pipeline lines with a total capacity of 55 billion cubic meters of gas per year from the coast of Russia through the Baltic Sea to Germany.

The new pipeline is planned to be built next to the existing Nord stream. It will pass through the territorial or exclusive economic zones of the countries along the shores of the Baltic sea — Russia, Finland, Sweden, Denmark and Germany. The construction permit remained only to obtain from Denmark.

A number of countries are against Nord stream 2, in particular Ukraine, which is afraid of losing revenues from the transit of Russian gas, and the United States. In addition, Latvia, Lithuania and Poland jointly stated that they did not approve of the construction. Their leaders are also confident that this is a political project.