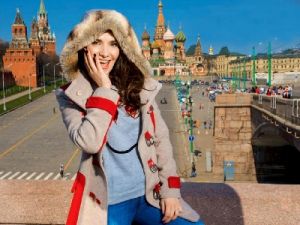 OREANDA-NEWS   Uruguayan actress and singer Natalia Oreiro admitted to journalists that she feels almost Russian, and to work in a new tour with a Russian team of musicians and dancers it is comfortable.

Oreiro tour "Unforgettable" started on March 16 in Chisinau, the capital of Moldova. In Russia, concerts will be held in 13 cities. The concert in Moscow will take place in Crocus City Hall on March 28, the tour will end on April 16 in Voronezh.

"I have already been to some cities where I will perform - Moscow, St. Petersburg, Rostov-on-don, Voronezh, for example. On tour I work with a Russian team, musicians and dancers will be Russian. I feel almost Russian, why not have a Russian team? I'm comfortable... I am very pleased with the first concert in Chisinau, everything was great, " Oreiro said at a press conference.

Natalia Oreiro also said that she would like to open a boutique in Russia. She admitted that as a child she studied at the courses of cutting and sewing. "I always liked to sew, and I myself come up with costumes for the show," said the singer.

Oreiro together with her sister launched a line of designer clothes called Las Oreiro.

Tour Oreiro dedicated to space. The actress said that it seemed to her a good idea, as the tour takes place in Russia – a space power and, in particular, in April – captures the day of cosmonautics.

Natalia Oreiro became widely known in Russia thanks to the main role in the series "Wild angel".

In November 2018, it was reported that the Uruguayan singer Natalia Oreiro starred in the video in the suburban Balashikha. In the story, the television in the 90s in the Russian province there is a village " Oreirovo", where three girls dream to be like his idol Oreiro. One of the fans wrote a letter to the singer, after which she really comes to the village and arranges a bachelorette party, dancing and photographed against the carpet on the wall — a symbol of a bygone era. Most of the roles in the video were played by native women of Balashikha.