Nazarbayev's Daughter Made a Decision on Participation in the Elections 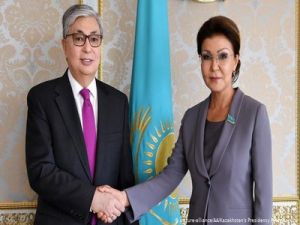 OREANDA-NEWS. The head of the Kazakh Senate, Dariga Nazarbayeva, decided not to participate in the upcoming elections, her assistant said. The eldest daughter of President Nursultan Nazarbayev, who has left office, has been in politics since the 2000s.

The eldest daughter of the retired President of Kazakhstan Nursultan Nazarbayev Dariga will not stand for the upcoming presidential election. This is reported by Tengrinews, citing assistant Nazarbayeva Saule Mustafayeva. “No, Dariga Nursultanovna is not going to run,” we quote her words.

Dariga Nazarbayeva is the eldest daughter of the first president of the country, since March 20 she has headed the Senate of the Parliament of Kazakhstan. Before her, the speaker was Kasym-Zhomart Tokayev, who became president after the resignation of Nursultan Nazarbayev. She entered politics in the mid-2000s, becoming a member of the lower house of parliament, in 2015–2016 she was deputy chairman of the government. From 2016, she moved to the upper house, leading the committee on international relations, defense and security.

In March, Nursultan Nazarbayev, who led Kazakhstan for almost 30 years, announced his resignation. His successor was Kasym-Zhomart Tokayev, Speaker of the Senate of Kazakhstan. Nazarbayev himself will remain at the head of the Security Council of the Republic. Later, the head of Kazakhstan Kasym-Zhomart Tokayev appointed to hold early presidential elections on June 9. “As the acting head of state, I guarantee that the elections will be held honestly, openly, fairly! This is my principled position!” - said Tokayev. He noted that he had consulted on this issue with Yelbasy Nursultan Nazarbayev, the speakers of both houses of parliament and the country's prime minister.