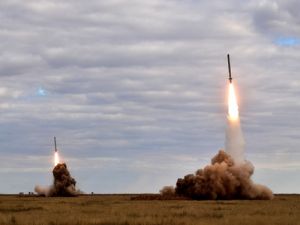 OREANDA-NEWS. Russia, “obviously,” is expanding its strategic nuclear potential, and all of its new weapons should be included in the Strategic Offensive Arms Reduction Treaty (START) if extended. Such an opinion in an interview with the Ameikan television channel, expressed the head of the Pentagon, Mark Esper. “We say: listen, if there will be an extension of the START-3 treaty, then we must ensure that it includes all the new weapons that Russia wants to get”, Esper said.

He added that Russia currently has cruise missiles aimed at Europe, presumably with nuclear warheads. The head of the Pentagon said this, commenting on the explosion at a military training ground in the Arkhangelsk region, which killed several employees of Rosatom. However, in the long run, Esper considered China the main threat to the United States. In his opinion, a strong economy, political weight and ambition speak in favor of China.

In mid-August, after Washington officially withdrawn from the Treaty on the Elimination of Intermediate-Range and Shorter-Range Missiles, the United States tested a cruise missile, which went beyond the scope of the agreement. Pentagon spokesman Robert Culver argued that the United States began developing land-based missiles and ballistic missiles only after suspending its obligations. Moscow believes that the launch is evidence of a long preparation for the United States to disrupt the treaty.

In a message to the Federal Assembly in March 2018, President Vladimir Putin showed the latest Russian weapons, including the Sarmat and Vanguard missile systems, cruise missiles with nuclear power plants, and the Dagger aviation missile system. START-3 was signed by ex-presidents of Russia and the United States Dmitry Medvedev and Barack Obama in 2010. It entered into force in February 2011 and expires in early 2021. The United States admitted that the agreement may not be extended.