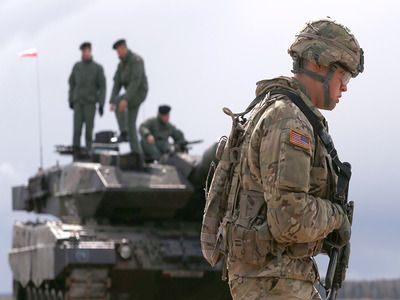 WorldMilitary securityTerritorial administrationInterstate relations
OREANDA-NEWS. NATO will deploy American troops at at least six points in eastern Poland. This was announced on the air of the Polish Radio by the Minister of Defense of the Eastern European Republic, Mariusz Blaščák. “Under the agreement, we agreed that there will be six points of deployment of units in Poland”, he said.

The head of department stressed that the exact location of the US military Warsaw and Washington will determine a separate agreement. “It is important to strengthen the eastern flank of NATO, and therefore the eastern flank of our country, in order to deter a possible aggressor. The alleged invader knows that violating the Polish borders means not a local conflict, but a global one. The presence of the US military indicates that the attack on Poland will be an attack on the entire NATO alliance”, Blashchak concluded.

The Polish minister said that a divisional command would be created in Poland, to which all American troops on the eastern flank of NATO would obey. Commenting on the statements of the Polish minister, the first deputy chairman of the Foreign Affairs Committee of the Federation Council, Vladimir Dzhabarov, noted that if this happens, Russia will strengthen its troops on the western border as a response measure.

“In Poland, apparently, they do not understand this. Perhaps they want to be someone's military base”, said the senator. “At the same time, from the point of view of security of Poland, the deployment of US troops will do nothing”, he said. Currently, there are about 4,500 US military men from the armored brigade and multinational battalion group in Poland. In late April of this year, the two countries agreed to increase the number of this contingent. More than 30 thousand of the US military are stationed on a permanent basis in Germany’s neighbor to Poland.
Source: OREANDA-NEWS
Поделиться в соцсетях:
Подписаться на наши группы: Instagram | VK | Facebook | Twitter
Rate this article: