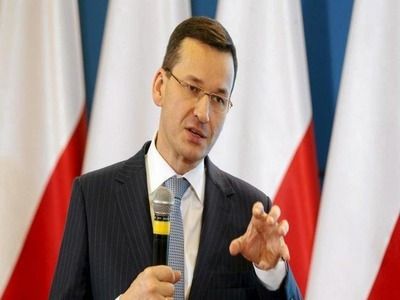 WorldInternational activitiesInterstate relationsTerritorial administration
OREANDA-NEWS. The decision of Great Britain to leave the European Union was good news for Poland in terms of economy and labor inflow, as citizens working in the United Kingdom began to return to the country. This was announced by Prime Minister of Poland Mateusz Moravecki on Tuesday in an interview with a Japanese television channel.

"Of course, leaving the EU is regrettable, but I respect the decision of the British people. About a million Poles are working in Britain, and tens of thousands have already returned to their homeland. For Poland, this is good news", he said, noting that this trend will revive the economy countries due to the influx of labor.

Moravecki also expressed hope that Japanese companies that intend to move to the EU after Brexit will also consider Poland as a direction for developing their business. Great Britain was supposed to leave the EU on March 29, 2019, but the date was repeatedly postponed, and now the country will have to leave the European Union at the end of this month.

Earlier, EU negotiator Michel Barnier and other representatives of the community said that it would be extremely difficult to complete negotiations in such a short time and extension of the transition period may still be necessary, despite the tough stance of the British government.
Source: OREANDA-NEWS
Материалы по теме: