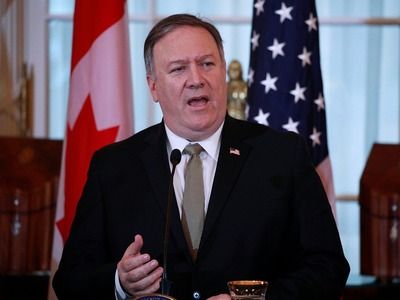 WorldInterstate relationsMilitary security
OREANDA-NEWS. Russia, like other countries, must “leave” Venezuela and stop interfering in its affairs. This was stated in an interview with ABC on Sunday by US Secretary of State Mike Pompeo. At the same time, he stressed that he "does not know" when the president of Venezuela, Nicolas Maduro, whom the United States considers a usurper, can be removed from power. “It can take days, weeks, or months,” Pompeo stressed. He placed the main responsibility for supporting the Maduro regime from outside Cuba.

Pompeo did not rule out that the United States will sooner or later have to resort to military intervention in Venezuela. On the eve of his address to the people of Venezuela, he assured that the United States remains on the side of those who are "fighting for freedom and democracy," and again condemned Maduro. On May 6, the Secretary of State is to meet in Finland with Russian Foreign Minister Sergei Lavrov. Venezuela will be the main theme of the meeting. Earlier this week, the presidents of the two countries discussed her in a telephone conversation, and Donald Trump told reporters that Putin, in his opinion, does not seek to “intervene” in the events in Venezuela.

Russia accuses the United States of seeking to stage a coup in Venezuela and overthrow Maduro. The United States recognizes opposition leader Juan Guaydo as the legitimate head of Venezuela. Open confrontation in the South American country has been going on for more than three months. On the eve of Guaydo, in an interview with Washington Post, he admitted that attempts to remove Maduro from power last week failed. According to him, for the success of the operation, his supporters didn't have enough support from the military. Several dozen Russian military have recently arrived in Venezuela. Moscow stated that it was a planned trip related to military-technical cooperation between the two countries.
Source: OREANDA-NEWS
Поделиться в соцсетях:
Подписаться на наши группы: Instagram | VK | Facebook | Twitter
Rate this article: