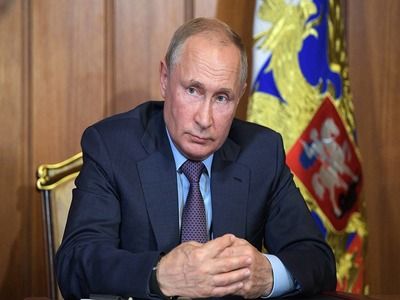 WorldEventsInterstate relationsMinistries and departments
OREANDA-NEWS. Russian President Vladimir Putin, at the invitation of his French counterpart Emmanuel Macron, will pay a working visit to France on Monday, the Kremlin’s press service said. The meeting will be held in the south of the country, in the summer residence of the head of the French state Bregancon. The ancient fort, which has seen many world leaders within its walls, will for the first time in its history become the meeting place of the presidents of Russia and France.

The state and prospects for the development of Russian-French relations in the political, trade, economic, cultural and humanitarian spheres, as well as an in-depth exchange of views on pressing international and regional issues, including resolving the situation in Syria, Libya, Ukraine and around the Iranian nuclear program, will be key upcoming contacts, presidential aide to Yury Ushakov told reporters. The Kremlin also noticed that in recent months, bilateral interstate political contacts have intensified. In particular, Ushakov noted that on June 24 in Le Havre, Prime Minister Dmitry Medvedev held talks with his French counterpart, Edouard Philippe.

In turn, a member of the Champs Elysees told the Russian media that the leaders of Russia and France will conduct a significant part of the continued exchange of opinions face to face. He noted that between Putin and Macron a "trusting dialogue format" has developed. French media recall that from the first meetings, Macron strove to establish personal relationships with leading foreign colleagues. "Macron and Putin have long been calling each other by name", the journalists noted.

According to experts, the French president was most successful in building personal relations with Vladimir Putin and German Chancellor Angela Merkel. For France, analysts say, this is all the more important in the current context.