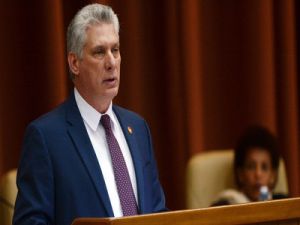 OREANDA-NEWS. Russian President Vladimir Putin congratulated Miguel Díaz-Canel Bermudez on his election as President of Cuba. This was reported on the Kremlin website. “The decision of the National Assembly testifies to your high political authority, to the recognition of your merits in solving the urgent tasks of the country's socio-economic development”, Putin said, wishing him success as head of state and prosperity.

He emphasized that Moscow appreciates a strategic partnership with Havana, and expressed confidence that the upcoming visit of Diaz-Kanel to Russia will affect the strengthening of bilateral cooperation. Russian Prime Minister Dmitry Medvedev also sent his congratulations to Dias-Kanel. Deputies of the unicameral Cuban parliament - the National Assembly of People's Power - voted for Diaz-Canel of Bermudez the day before. The presidency in this country was restored for the first time in 43 years: in 1976, the presidency was abolished, and the chairman of the Council of State became the head of state.

Fidel Castro was the chairman of the State Council for 30 years, in 2006 he was replaced by brother Raul. Miguel Diaz-Canel Bermudez, 59, took over as head of the State Council in 2018. In 2019, the Constitution was changed in the country, restoring the post of president and setting a four-year term of office for him.