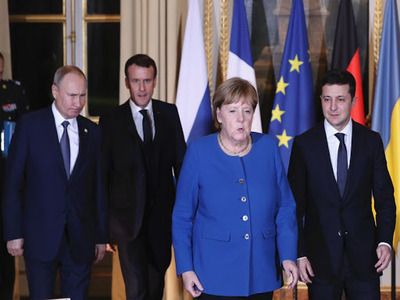 WorldDiplomatic organizationsInterstate relationsMilitary security
OREANDA-NEWS. Russian President Vladimir Putin, the leaders of the FRG and France, Angela Merkel and Emmanuel Macron, in a telephone conversation supported the observance of the ceasefire in Libya and the resumption of dialogue in line with the decisions of the Berlin Conference, the Kremlin press service said.

"In an exchange of views on the Libyan settlement, leaders spoke out for the full observance of the ceasefire and the resumption of political dialogue in line with the decisions of the Berlin Conference on Libya", the statement said.

After the overthrow and assassination of Libyan leader Muammar Gaddafi in 2011, Libya virtually ceased to function as a single state. Dual power reigns in the country now. The parliament elected by the people sits in the east, and in the west, in the capital Tripoli, the Government of National Accord, formed with the support of the UN and the European Union, rules. The authorities of the eastern part of the country operate independently of Tripoli and cooperate with the army of Marshal Khalifa Haftar.

The main outcome of the conference was an appeal by its participants to a ceasefire in Libya and an obligation to refrain from interfering in the conflict, observing the embargo on the supply of arms to the parties. In addition, participants in the meeting proposed the establishment of a ceasefire monitoring committee.
Source: OREANDA-NEWS
Материалы по теме: