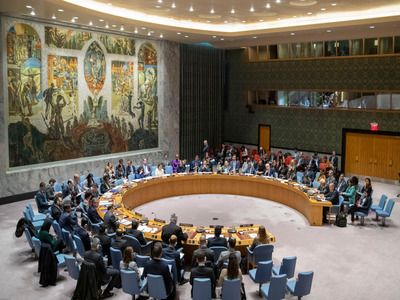 WorldMilitary securityInternational activitiesTerritorial administration
OREANDA-NEWS. Representatives of Russia presented to the members of the UN Security Council evidence that the chemical attack in the Syrian Duma in 2018 was falsification. According to the Russian News Agency, the discussion of this issue took place at the meeting according to the “Arria formula” - an informal meeting not provided for in the UN charter.

Maxim Grigoryev, director of the Foundation for the Study of Democracy, spoke as a speaker from Russia. He said that during a survey of eyewitnesses, it turned out that in fact there were no people in the Duma hospital who had suffered from the use of chemical weapons. The Russian representative also showed that all attempts by OPCW experts to cast doubt on the initial report on the outcome of the investigation into the Duma were ignored.

According to the agency, the Russian representatives failed to convince all the interlocutors. In particular, confidence that the initial report on the Duma was fair, was expressed by representatives of Estonia, the UK and the United States.

In April 2018, the White Helmets non-governmental organization announced the use of chemical weapons in the city of Duma, not far from Damascus, which at that time was controlled by the Syrian opposition. A number of Western countries blamed the Syrian government for the incident, but they did not admit guilt in Damascus. Russia supported the position of the government of Bashar al-Assad.
Source: OREANDA-NEWS
Материалы по теме: