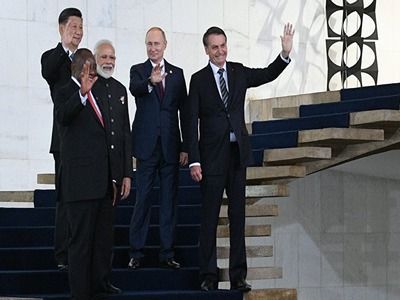 WorldDiplomatic organizationsInternational activitiesInterstate relations
OREANDA-NEWS. The official Internet portal of the Russian BRICS Chairmanship (Brazil, Russia, India, China, South Africa) will be launched shortly. This is stated in the message of the Russian Foreign Ministry following a briefing by the Deputy Foreign Minister of the Russian Federation, Sherpas in BRICS Sergey Ryabkov for representatives of the diplomatic corps accredited in Moscow.

"In the near future, the official Internet portal of the Russian presidency of the BRICS will be launched at: www.brics-russia2020.ru", the Russian Foreign Ministry said. The ministry added that the briefing presented key priorities of the Russian chairmanship in joining the three areas of the BRICS strategic partnership - politics and security, economics and finance, cultural and humanitarian contacts.

Since January 1, the BRICS chairmanship has passed from Brazil to Russia. During the year, Moscow plans to hold about 150 events at various levels. Their highest point will be the BRICS summit, which will be held in July in St. Petersburg. Another meeting of the BRICS leaders will take place on the sidelines of the G20 summit in November in Riyadh.
Source: OREANDA-NEWS
Поделиться в соцсетях:
Подписаться на наши группы: Instagram | VK | Facebook | Twitter
Rate this article: