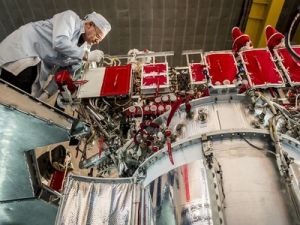 OREANDA-NEWS. Specialists of the All-Russian Scientific Research Institute of Physico-Technical and Radio Engineering Measurements are developing a device, the placement of an upgraded version of which on satellites can improve the accuracy of their clocks and improve the performance of navigation systems. This was reported to the Russian media at the institute.

"The scientists of the institute have mastered the technology of developing optical frequency standards. In the near future, work will be completed on creating a ground-based mobile version of such a standard. These developments will allow us to gain experience and create prerequisites for developing mobile clocks in space. three or four years", - noted at the Institute.

The optical frequency standard is a laser with a high stable frequency. It is planned that the new development will have a volume of not more than 1 cubic meter and will be a set of tools attached to the "optical table". As the main substance in it, it is possible that ytterbium will be used, the atoms of which, as a result of cooling, will change the state (optical transition), creating radiation with a high stable frequency.

Due to this, the new standard can expand the capabilities of positioning systems and make them more accurate. According to Blinov, "the error in determining the coordinates of the consumer (car, pedestrian) is largely determined by the accuracy of the frequency standard, which is located on board the spacecraft and on Earth". A satellite radiates an exact, stable signal during flight that a consumer receives. Coordinates and time are determined by signals from four spacecraft. Now the main work on the creation of a ground version of the standard is in the final stage.