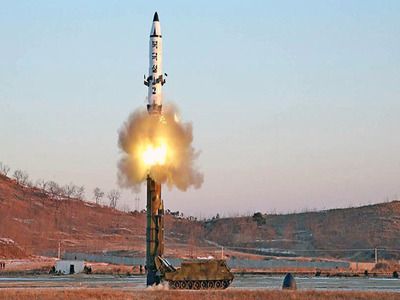 WorldMilitary securityTerritorial administrationInterstate relations
OREANDA-NEWS. Two shells launched by the DPRK on Monday flew 240 km, reaching a maximum height of 35 km. This was reported by the South Korean Committee of Chiefs of Staff. According to the agency, launches were made from the area of ​​the city of Wonsan.

The presidential administration of the Republic of Korea held an emergency meeting in connection with North Korean launches. The meeting was chaired by the President’s Advisor on National Security Chon Yui Young, as well as representatives of the Ministry of Defense and other departments. In a press release distributed following the meeting, it was reported that the actions of the DPRK cause "serious concern" in Seoul.

Earlier Monday, the Committee of the Chiefs of Staff of the Republic of Korea announced that the DPRK launched two shells of an unknown type from the Wonsan area towards the Sea of ​​Japan. This is the first such launch since the beginning of 2020. In December last year, DPRK leader Kim Jong-un announced that his country would soon introduce new strategic weapons.