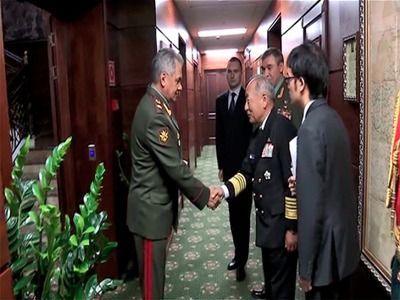 WorldInternational activitiesInterstate relationsMilitary security
OREANDA-NEWS. Cooperation between Moscow and Tokyo in the military sphere will be productive, Russian Defense Minister Sergei Shoigu expects. He stated this on Thursday in talks with his Japanese counterpart Takeshi Iwaya. “First of all, I want to thank you for the invitation to visit Japan and the hospitality provided. We conduct our negotiations almost immediately after the ascension to the throne of Emperor Naruhito and the advent of Rave’s“ harmonious harmony” era in Japan. We hope this time will be beneficial for Russian-Japanese relations, including in the military field", said Shoigu, referring to a colleague.

The minister called it encouraging that the consultations of the heads of defense and foreign affairs agencies of Russia and Japan in the "2 + 2" format have become traditional. Previous such negotiations took place in Moscow in 2018. "Today, we are entrusted with the important task of bringing bilateral relations to a qualitatively new level, which will contribute to finding mutually acceptable solutions to the most sensitive problems", the defense minister said.

The Russian Defense Minister said that the military of Russia and Japan make a significant contribution to the formation of an atmosphere of mutual trust, and bilateral relations in the military field continue to develop steadily. "The joint dialogue between the foreign policy and defense ministries of the two countries makes a serious contribution to creating an atmosphere of mutual trust and security in the Asia-Pacific region", Shoigu said on Thursday, speaking at a meeting of the Russian-Japanese bilateral dialogue between the foreign and defense ministers.

According to the minister, "at present, Russian-Japanese relations in the military field continue to develop steadily". Shoigu added that he was counting on "productive and informative discussions" with Japanese colleagues. The minister thanked the Japanese partners "for the excellent organization" of the consultations in Tokyo.