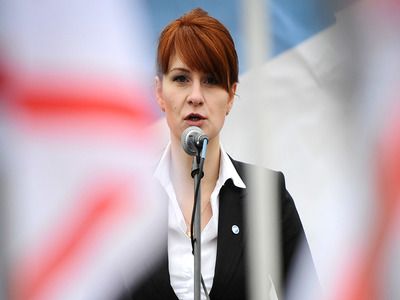 Slutsky: Butina Will Return to Russia Three Days After Her Release

WorldInternational activitiesJusticeMinistries and departments
OREANDA-NEWS. Convicted in the United States, Russian woman Maria Butina will return to Russia within three days after her release, scheduled for October 25. This was announced on Tuesday in his telegram channel by the head of the State Duma Committee on International Affairs Leonid Slutsky after a conversation with Butina.

“Butina’s sentence expires on October 25, she will have to fly to Russia over the next three days. Maria has a lot of plans, but, of course, she wants to spend her first days after returning to her homeland with her family”, wrote Slutsky.

Butina was arrested in Washington on July 15, 2018 - on the eve of the meeting of Russian and US Presidents Vladimir Putin and Donald Trump in Helsinki. She was charged with participation in a conspiracy to conduct activities in favor of a foreign state in the United States. American intelligence agencies claimed that the Russian woman conducted such activities without being an agent of a foreign state registered with the Ministry of Justice. On April 26, Butina was sentenced to 1.5 years in prison. Moscow characterized the charges against her as fabricated and demanded her release from custody.