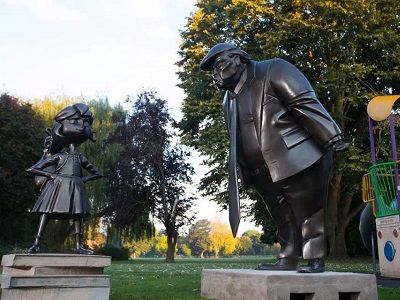 Statue of Ferocious Donald Trump Was Established in the UK

OREANDA-NEWS The sculptural composition depicting the angry President of the United States Donald Trump, who dangerously hangs over the imperturbable five-year-old girl, appeared in the English village of great Missenden. In this place British writer Roald Dahl (1916-1990) lived and worked during long time. According to the press Association, scheduled for Monday the opening of the monument is dedicated to the 30th anniversary of the publication of the book with dal-the story "Matilda".

In the work of the writer, the gifted girl Matilda Wormwood together with her friends challenges the world of indifferent and despotic adults - first of all, miss Tranchbull - the school headmistress with the manners of a dictator. According to the survey, which was conducted by the company that manages the rights to the books and characters Dahl Matilda today, which in 2018 would be 35 years, most likely, in one way or another would be opposed to the current President of the United States. This was stated by 42% of the survey participants. As a result this monument was installed near the house-Museum of the writer.

A massive statue of Trump stands next to Matilda, which rests his hands on the sides. The President of the United States leans towards her with an angry expression. Matilda herself, depicted by the sculptor in a deliberately unrealistic, "cartoon" manner, meets him with a bold and unflappable grin. The plot of the composition largely repeats the intent of the sculptor Kristen Visbal, which is March 8, 2017 arbitrarily set in New York, a bronze statue of the "Fearless girl" in front of the famous statues "the charging bull".

"Matilda's example shows that every person, no matter how small and powerless he is, can defeat those who plays in his life the role of miss Trunchbull. It seems that today this idea is more significant than 30 years ago," - said the representative of the Roald Dahl Story Company Bernie Hall.

Roald Dahl, who was born in a family of immigrants from Norway, is known in the world thanks to his books for children and films based on them, characterized by a fair share of black humor. In addition to published in 1988, "Matilda", he wrote the story" Charlie and the chocolate factory "and" BGG, or big good giant", the last film adaptation of which came out on the big screen in 2005 and 2016, respectively. The movie "Matilda" (Matilda, 1996), who took the role which was played by comedian Danny De Vito in the UK and the USA is considered a classic of children's cinema. The musical "Matilda" since 2011 is in theaters of the West End and Broadway and was awarded seven prestigious Laurence Olivier awards.