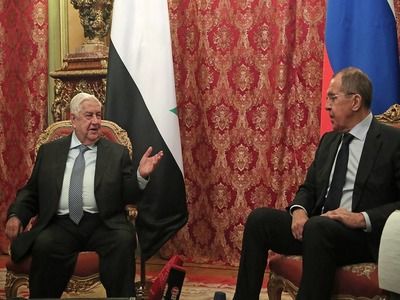 WorldInterstate relationsOilMinistries and departments
OREANDA-NEWS. The Syrian authorities regard US actions as a piracy in relation to the natural resources of the Arab Republic. This was announced on Monday by Deputy Prime Minister, Syrian Foreign Minister Valid Muall at a meeting with Russian Foreign Minister Sergey Lavrov. "The Syrian people are being abducted by its bowels, its oil wealth. The United States is engaged in this", he said. "We consider this theft by piracy, since it is realized using weapons".

The minister added that at the same time, Syria in the north is being subjected to aggression by Turkey. "Turkey is violating and encroaching on our unity and territorial integrity. This is aggression", Moulem said. He also added that a blow to the refinery in the Homs area was inflicted by drones from an American base in Al-Tanf.

“The United States, using its illegal military base in Al-Tanf, sent unmanned aerial vehicles to Homs and launched air strikes on them from the oil refining infrastructure, this happened four days ago”, he said. “I want to note that this all happens in the winter, when we "both oil and gas are very necessary. And yesterday Israel launched an attack on the SAR, firing a number of missiles at targets in Damascus and its suburbs".
Source: OREANDA-NEWS
Материалы по теме: