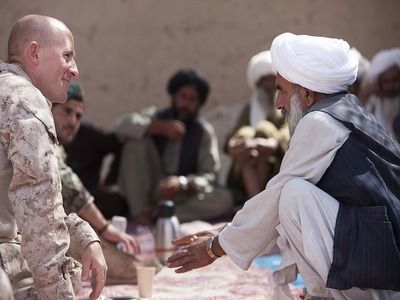 Taliban Spokesman Says Movement Ready to Resume Talks with US

WorldMilitary securityInterstate relationsEvents
OREANDA-NEWS. The radical Taliban movement (banned in the Russian Federation) is ready to resume negotiations with the US if such a proposal comes from Washington. This was announced to the British Broadcasting Corporation on Tuesday by Sher Mohammad Abbas Stanikzai, head of the Taliban political wing in Qatar.

"On our side, the doors remain open to continue negotiations, and we hope that the other side will reconsider its decision regarding the [termination] of negotiations", said the representative of the Taliban. A statement released on Tuesday by White House spokeswoman Stephanie Grisham noted that US President Donald Trump won't discuss a peace agreement with the Taliban while his representatives continue to carry out terrorist attacks.

The United States began last fall in fact separate peace talks with the Taliban. The government in Kabul did not take part in them and was only notified of the results ex post facto by the American side. Afghan authorities have repeatedly sharply criticized the US administration for such an approach to peace talks. According to the results of nine rounds of meetings, US Special Representative Zalmay Khalilzad in early September confirmed the achievement of a fundamental peace agreement with the Taliban, including the withdrawal of more than 5,000 US troops from Afghanistan.

However, Trump then announced the cancellation of a secretly prepared meeting with his Afghan counterpart Ashraf Ghani and the Taliban leaders at his residence in Camp David. This decision was made after a terrorist attack in Kabul, which killed 12 people, including an American soldier. Earlier, a delegation of the Afghan Taliban movement visited Moscow, where on Friday held talks with Russian representatives about the prospects for a peaceful settlement in Afghanistan.