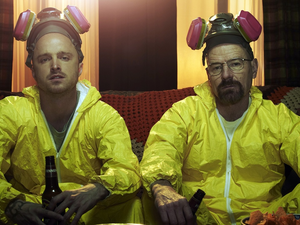 OREANDA-NEWS Actors Brian Cranston and Aaron Paul, who played the main roles in the popular TV series “Breaking Bad,” finally presented their long-awaited and widely advertised joint secret project, reports The Daily Mail. It turned out to be not a movie, as all the fans expected, but a drink.

The acting duo said that they now produce their own brand of mezcal, a traditional Mexican alcoholic beverage made from agave and a type of tequila. Fans of the series called this news "the most disappointing announcement in the history."

Actors hinting about a joint project fueled the interest of fans for several weeks. At the same time, rumors began to circulate that the creator of "Breaking Bad", Vince Gilligan, wants to make s story of Aaron Paul's character - Jesse Pinkman.