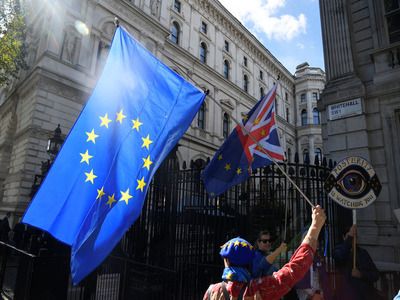 WorldInterstate relationsDiplomatic organizationsMinistries and departments
OREANDA-NEWS. European Commission President Jean-Claude Juncker said that due to the lack of progress in negotiations with British Prime Minister Boris Johnson, the risk of the UK leaving the EU without an agreement remains very high. He made a corresponding statement, speaking at a plenary meeting of the European Parliament on Wednesday.

"You will be surprised, but Johnson told us at the meeting that he wants to conclude agreement on exit conditions. But he also said that the UK will leave the EU on October 31 with or without a deal", Juncker said. “This suggests that there is a risk Brexit remains very real without a deal. Perhaps it will be the choice of the UK government, but not the EU". He emphasized the need to maintain the integrity of the common European market and to prevent the appearance of a physical border between Northern Ireland and the Republic of Ireland.

"I still hope that we can achieve a coordinated UK exit from the EU, so we asked the UK to put forward concrete, detailed and working ideas on the most difficult issue, in particular the tight border with Northern Ireland", the Finnish Minister for Affairs said at a meeting Europa Tutti Tuppurainen. Michel Barnier, EU chief negotiator for Brexit, pointed out that in the case of Brexit, without a deal, the problems of the Irish border, as well as London’s financial obligations to the EU, won't disappear and will have to be addressed.

The leader of the European People’s Party, Manfred Weber, pointed out the need to conclude a deal to ensure financial stability and suggested again giving the British people the opportunity to speak out about Brexit. As a result of the debate, a resolution is expected to be adopted in which the European deputies outlined a position on key issues related to negotiations on Britain's exit from the EU.