The Most Powerful Typhoon in 60 Years Is Approaching Japan 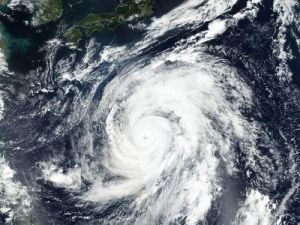 OREANDA-NEWS. Typhoon named Hagibis approaching Japan will be comparable in strength to typhoon Kanogawa, which hit the country 61 years ago and claimed the lives of over 1.2 thousand people. This is stated in the message of the Japan Meteorological Agency.

A natural disaster is expected to reach the Tokai region or Kanto region on the evening of October 11 and linger there for a day, and then continue to move north-east, to the Tohoku region. Forecasters predict a strong wind on October 12 and 13 mainly in the east of the country. According to the meteorological agency, wind speed can reach up to 45 meters per second (162 kilometers per hour), with gusts up to 60 meters per second (216 kilometers per hour). This wind force is enough to turn the truck over and more than enough to knock down trees and power poles. Besides, the typhoon will bring record-breaking heavy rains.

Meteorologists compare the impending natural disaster with the typhoon Kanogawa (also known as Ida) in 1958, which caused severe flooding. Due to possible heavy precipitation, weather forecasters warn of the threat of landslides, storms and flooding.

Media report that Tokyo residents are actively buying essential goods. The most popular among them are drinking water, bread, instant noodles, and gas cylinders.

On September 9, in Japan, over 885 thousand houses were left without electricity because of the typhoon named Faxai. According to Japanese authorities, 22 people were injured due to the disaster.

On September 22, typhoon Tapah reached the country, as a result of which two people were killed, another 19 were injured. About 40 thousand households were left without electricity.

Totally, Kanogawa may become the 19th typhoon which hits Japan in 2019.