The Pentagon Accused Russia of “Aggressive Modernization of the Armed Forces” 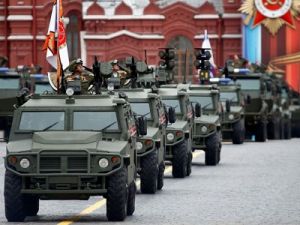 OREANDA-NEWS   Russia is engaged in "aggressive modernization of its armed forces," said acting Pentagon chief Patrick Shanahan. The Pentagon is modernizing to win competition with Russia and China, he said. Shanahan also claims that Moscow is intimidating its neighbors, using for its strategic benefit their dependence on energy resources.

"Despite the economic difficulties and the volume of its economy, which is less than [a similar indicator] of the state of Texas, Russia is seeking to regain the status of a great power. Although it did not achieve this goal, Russia is successfully playing a weak strategic card, aggressively modernizing its armed forces," — quotes the text of Shanahan's speech to the Committee on armed forces of the Senate of the us Congress at the hearings on the budget of the US Defense Ministry.

The Pentagon is modernizing to win competition with Russia and China, said the acting head of the Department.

The Pentagon suggests that one of the Russian hypersonic systems can be adopted by the end of the year. Shanahan said that Moscow is developing a large complex of modern non-strategic weapons. "This complex includes the SSC-8 cruise missile capable of carrying nuclear warheads... this system clearly violates the Treaty on the elimination of intermediate — range and shorter-range missiles (INF)," the Agency said.

The us defense Ministry also said that Russia projects military power beyond its borders, intimidates neighbors and uses for its strategic benefit their dependence on energy resources. In addition, Moscow was accused of undermining sovereign democratic processes in other countries.

Earlier on March 14, it became known that the United States can test a new cruise missile with a range of up to 1000 kilometers in August 2019, immediately after the release of the INF, which prohibits missiles with a range of 500 to 5.5 thousand kilometers. Also in development is the second military project, which can be tested in November. According to the Pentagon spokesman, the two missiles will have nuclear capabilities.

Us President Donald Trump February 1, said that Washington is launching the procedure of withdrawal from the INF. The next day, the state Department sent a note to the Russian Foreign Ministry. The state Department stressed that the US can withdraw its decision to withdraw from the Treaty within the next six months and can do so if the Russian Federation "returns to full and verifiable compliance with the INF Treaty." On the same day, Vladimir Putin said that Russia was suspending its participation in the Treaty. The Head of state instructed Defense Minister Sergei Shoigu and foreign Minister Sergei Lavrov to stop trying to initiate negotiations with the United States to preserve the INF TREATY until Washington itself begins a dialogue.