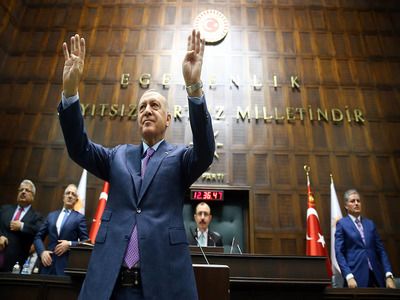 WorldTerritorial administrationMilitary securityInterstate relations
OREANDA-NEWS. The third round of Russian-Turkish talks on the situation in Idlib began on Wednesday in Ankara. This was reported by the Turkish television channel.

According to him, the meeting of representatives of the military departments of the two countries began at 17:00 Moscow time. An hour later, negotiations will continue in the format of mixed delegations. Earlier on Wednesday, Turkish Foreign Minister Mevlut Cavusoglu said that following talks, he expects Ankara and Moscow to achieve a stable ceasefire in Idlib.

In early February, the situation in Idlib sharply worsened. This happened after the Russian and Turkish military made another attempt to introduce a regime of silence, but the terrorists only intensified their attacks. On Wednesday, Turkish President Recep Tayyip Erdogan announced Ankara’s readiness to use all his military power in the event of an operation in Idlib. He also said that the start of a new military operation in Idlib is "only a matter of time", all preparations for its implementation have already been completed.

On February 8 and 10, two rounds of consultations between officials of the Russian Federation and Turkey took place in Ankara. First of all, the situation in the Idlib de-escalation zone was discussed. Then consultations took place in Moscow.
Source: OREANDA-NEWS
Поделиться в соцсетях:
Подписаться на наши группы: Instagram | VK | Facebook | Twitter
Rate this article: