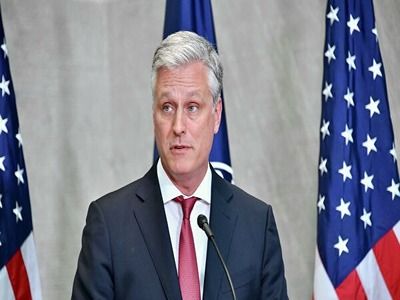 WorldEventsInternational activitiesMinistries and departments
OREANDA-NEWS. The US delegation at the celebration of the 75th anniversary of the Victory on May 9 in Moscow will be headed by Presidential Adviser on National Security Robert O'Brien. This is stated in a statement by US Ambassador John Sullivan, circulated on Thursday by the US diplomatic mission in Moscow.

"It's a great honor for me to report that US Presidential Adviser on National Security, Robert O'Brien, will lead the US delegation that will arrive in Moscow on May 9 to celebrate the 75th anniversary of the Victory over Nazi Germany", Sullivan said. The arrival of a high-ranking delegation indicates that the United States honors the general losses suffered by all the allies in the anti-Hitler coalition, the American and Soviet peoples during the Second World War, to make the world safe for everyone".

The parade in honor of the 75th anniversary of Victory in the Great Patriotic War will be held on May 9, 2020 in Moscow. Earlier invitations to visit the Russian capital to participate in the celebrations were sent to US President Donald Trump, British Prime Minister Boris Johnson, DPRK State Council Chairman Kim Jong-un, CIS leaders and the Shanghai Cooperation Organization, European leaders.
Source: OREANDA-NEWS
Другие новости: