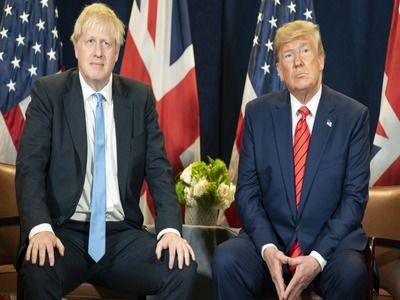 WorldInterstate relationsEventsMilitary security
OREANDA-NEWS. US President Donald Trump announced his readiness to negotiate with the UK on the terms of a trade agreement between the countries after the implementation of Brexit. He said this on Tuesday, speaking at the World Economic Forum in Davos.

"We look forward to negotiations on a new grand agreement with the United Kingdom. They have a wonderful new prime minister, Boris Johnson, who really wants to make a deal", he said.

Great Britain was supposed to leave the EU on March 29, 2019, but the date was repeatedly postponed, and now the country will have to leave the European Union at the end of this month. After the implementation of Brexit, the British government will need to conclude a trade deal with the United States, under which the kingdom will maintain economic relations with Washington as an independent state from Brussels.
Source: OREANDA-NEWS
Материалы по теме: