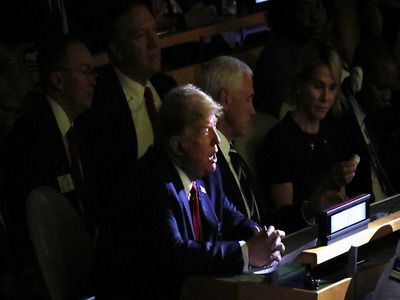 WorldInterstate relationsState financeEvents
OREANDA-NEWS. Washington will delay the allocation of funds to Kiev until Europe and other countries make their contribution. This was stated by US President Donald Trump, having arrived at the UN headquarters in New York, according to the American media. “I will suspend it until Europe and other countries contribute to helping Ukraine”, Trump said, complaining that the partners were in no hurry to contribute. “We invest most of the money, and I ask why this is happening”, the US president added.

Earlier, Trump said that the provision of financial assistance to Ukraine was suspended due to corruption in this country. At the same time, an American business newspaper reported that in a telephone conversation with Ukrainian President Vladimir Zelensky, Trump demanded that an investigation be opened in July against the son of former presidential candidate and vice president Joe Biden Hunter.

An American newspaper, citing senior US officials, said the US president had instructed to freeze the allocation of about $ 400 million for military assistance to Ukraine. This happened a week before he had a telephone conversation with President of Ukraine Volodymyr Zelensky. Zelensky, who arrived in the US on September 24, said he hopes for a productive meeting with Trump, as Ukraine needs the support of the United States. Earlier, American media reported that Trump had a telephone conversation with the leader of an unnamed foreign country.

The White House reported that during a telephone conversation with Vladimir Zelensky on July 25, Trump congratulated the Ukrainian leader on the recent elections. At the same time, they said in the office of the President of Ukraine that the leaders also discussed the “investigation of corruption cases that impeded interaction between Ukraine and the United States”.