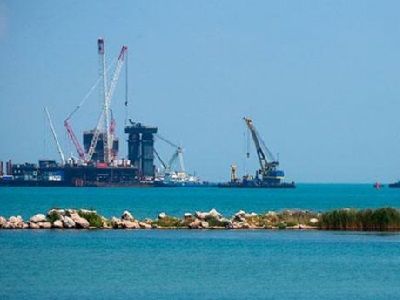 OREANDA-NEWS Ukraine is preparing a lawsuit to the UN international court of justice on Russia's responsibility in connection with the incident in the Kerch Strait, which took place on November 25. About it on air of the program "freedom of speech" on ICTV channel the President of Ukraine Petro Poroshenko told.

"Preparing a lawsuit to the international court of justice in connection with the act of aggression. This file has already been fixed - the responsibility of the Russian Federation for the aggression against our state", — quotes Poroshenko his press service.

According to him, Ukrainian sailors acted in full compliance with international law. Russian military, Poroshenko believes, attacked Ukrainian ships already in the neutral waters of the Black sea, opening fire on them.

Poroshenko emphasized that in the current situation the authorities of Ukraine "should unite efforts of the whole world". He recalled that earlier, Kiev has appealed to the European court of human rights (ECHR). That demanded from Russia to provide information on the Ukrainian seamen.

"According to the information that I own, Russia violated the decision of the ECHR and did not provide any information, so we must now unite the efforts of the whole world," Poroshenko said.

The fact that Ukraine appealed to the ECHR about the incident in the Kerch Strait, it became known last week. Ukraine asked the ECHR to intervene to ensure the well-being of its seafarers detained by the Russian side. In a statement, the court said that in response to the appeal of Kiev, the ECHR asked the Russian government for information about the state of the detained sailors and asked "to provide all relevant documents."

The incident in the Kerch Strait, which led to a new round of aggravation of relations between Russia and Ukraine, occurred on November 25. Then three ships of the Ukrainian Navy, according to the FSB, entered the territorial waters of Russia and did not respond to the warnings of the Russian side. As a result, the Russian border guards were forced to use fire to detain the court. All Ukrainian seamen are arrested by the court decision, all of them are in the Moscow pre-trial detention center. Ukrainian authorities believe that Russia has shown aggression, Moscow calls Kiev's actions a provocation.