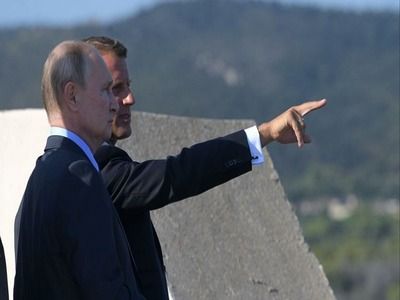 In turn, the deputy of "European Solidarity" Irina Gerashchenko, speaking about the meeting between Putin and Macron, criticized the situation in which her country is discussed without the presence of Ukrainian politicians. “We Ukrainians understand that the world won't fight for us”, she concluded. Ex-Foreign Minister Vladimir Ogryzko said in an interview with the Observer that he was “a little disappointed with the outcome of the Russian-French meeting, although Macron made the right statements”.

"Position" by both yours and ours is "clearly not in our favor", he remarked. In a Facebook post, Macron wrote in Russian that progress on many political or economic issues in Franco-Russian relations is evident due to the fact that the parties are making efforts to develop ties. Negotiations between the presidents of Russia and France at Fort Bregancon continued on Monday for more than two and a half hours. Earlier, negotiations between Russian President Vladimir Putin and French leader Emmanuel Macron at Fort Bregancon became one of the main topics for journalists in France. This was the first meeting between the countries in several years.