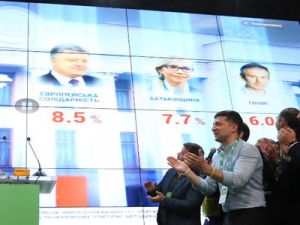 OREANDA-NEWS Ukrainian media, citing sources, announced a list of candidates for the post of prime minister of the country's government. There are several of them at once.

This is Vladislav Rashkovan - a representative of Ukraine in the IMF, top managers of Naftogaz, Andrei Kobelev and Yuri Vitrenko, secretary of the National Security and Defense Council, Alexander Danilyuk. The message was published in the Telegram-channel of the Ukrainian Truth publication.

Earlier News.ru reported that the party of the former President of Ukraine Petro Poroshenko “European Solidarity”, according to exit poll, has 8.9% of the votes in the elections to the Rada. This indicates a huge number of people preaching Nazism in the country.