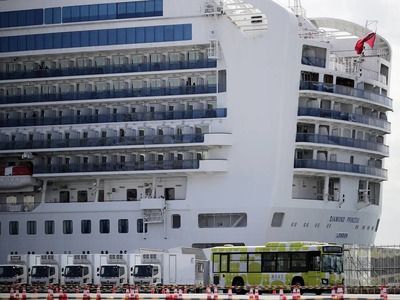 WorldPublic healthTourismWater transport and ports
OREANDA-NEWS. Ukrainian citizens working on the Diamond Princess cruise ship in the Japanese port, where an outbreak of coronavirus infection was recorded, refused to be evacuated to Ukraine. This was reported to Ukrainian Public Radio by the head of the crisis management department of the consular service department of the Ministry of Foreign Affairs of Ukraine Maxim Kovalenko.

“Their obligations are determined by the contract, their wishes are also taken into account”, said Kovalenko. “Now 24 of them said they do not intend to return to Ukraine so far. Contact is being made with another Ukrainian”. The representative of the Foreign Ministry added that if the Ukrainians change their minds, then the Ukrainian departments "plan to take appropriate measures".

Liner Diamond Princess left the Japanese port of Yokohama on January 20 and returned back on February 3. Among the passengers was a Chinese citizen who discovered a new coronavirus. The man came down on January 25 in Hong Kong. By decision of the Japanese authorities, a ship with about 3,700 passengers and crew from 50 countries, including 24 Russians, was quarantined from February 5.
Source: OREANDA-NEWS
Материалы по теме: