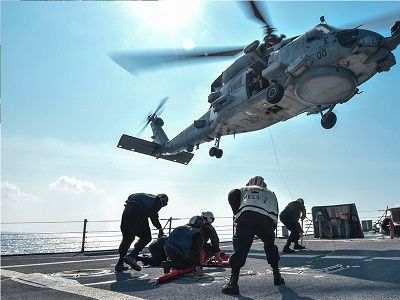 OREANDA-NEWS  The US Navy helicopter MH-60 fell on Friday on the deck of the aircraft carrier Ronald Reagan, which is currently in the Philippine sea, there are victims. This was reported by the command of the Pacific-based Seventh US fleet.

According to him, the incident occurred in the morning immediately after takeoff. The exact number of victims is not given, but the command reports that they are all in a stable condition, their lives are not in danger. Some of them are supposed to be evacuated to shore for assistance.

What was the cause of the accident is not currently known. The operation of the aircraft carrier, according to the American side, the fall of the helicopter is not affected, urgent repairs are not required.

The victims are examined by doctors, their lives are not in danger, but some may need evacuation to shore.

Sikorsky MH-60 Seahawk ("sea hawk") — deck multi-purpose helicopter, naval modification of the army UH-60. Designed for use on warships. The most notable feature of the design is a folding tail, which reduces the size of the machine for compact placement on Board the ship.

The US Navy strike group, led by the nuclear aircraft carrier Ronald Reagan, is based in Japan on the Yokosuka base in the Tokyo Bay. It is currently in the Philippine sea for regular operations.

USS Ronald Reagan became the ninth in a series of aircraft carriers Nimitz, the largest warships in the world, and became part of the us Navy in 2003 year. Its displacement of 97 thousand tons, length — 333 m, width — 77 m. On Board are installed a nuclear engine, consisting of two reactors with capacity of 191 MW. The crew of the USS Ronald Reagan includes up to 3.2 thousand people. In addition, 2.5 thousand people are engaged in servicing the aircraft carrier's air wing. It operates as part of the 7th US Navy, whose base is located in the Harbor of Yokosuka in Japan. This fleet provides control over the Western Pacific ocean