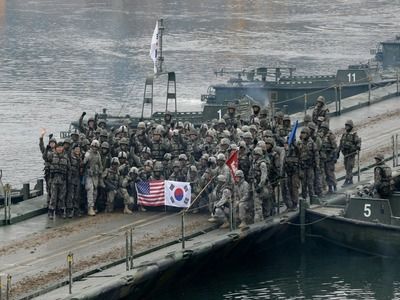 WorldState financeMilitary securityInternational activities
OREANDA-NEWS. The United States revised its position in negotiations on sharing military spending with South Korea, abandoning the demand for a fivefold increase in its contributions. This was reported by a Korean newspaper on Thursday with reference to a diplomatic source.

According to her, "the parties began to bring their positions closer and are now discussing a slight increase in the amount of South Korean payments" for maintaining the US military contingent in the country. The diplomat noted that the final agreement between the two countries could be concluded in February 2020.

According to him, the American side has come to understand that the requirement to increase payments to almost $ 5 billion is "excessive", and now we are talking about raising them only by 10-20%, as well as increasing purchases of US weapons by South Korea.

With President Donald Trump coming to power in the United States, Washington began to insist on increasing Seoul's contribution to maintaining the US contingent in the Republic of Korea. So, South Korean spending on joint defense in 2019 was increased by 8.2%, to $ 915 million. In November, Washington demanded that Seoul increase its contributions almost five-fold to $ 4.7 billion. The parties held several rounds of negotiations, but they all ended without an agreement.
Source: OREANDA-NEWS
Материалы по теме: