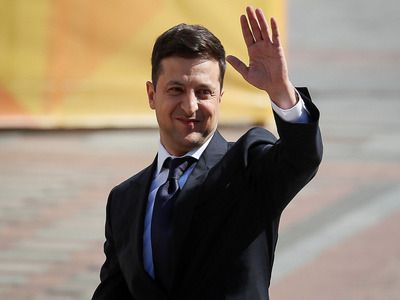 US Promises to Support Ukraine under President Zelensky

WorldInterstate relationsEventsState services to society
OREANDA-NEWS. The US promises to continue to support Ukraine and is awaiting “joint work” with President Vladimir Zelensky, who took office on Monday. This was stated to journalists by US Secretary of Energy Rick Perry, who at the head of the American delegation attended the inauguration ceremony of Zelensky.

“America’s clear message that the president requested to convey. The United States along with the people of Ukraine. We look forward to working with the new president, and I hope the new parliament,” said the US representative. "The United States will continue to support the people of Ukraine in defending independence, in the pursuit of freedom," he assured, adding that "one of the clearest demonstrations of freedom is freedom of the economy". Perry called the inaugural speech of Zelensky in the Verkhovna Rada "very powerful and important for the Ukrainian future".

Vladimir Zelensky took the oath to the Ukrainian people, after which the head of the Constitutional Court announced that he would take the office of head of state, the news agency reports. The inauguration took place at the ceremonial meeting of the Verkhovna Rada.

During the ceremony in parliament, President of Ukraine Vladimir Zelensky said that he would dissolve the Verkhovna Rada, this was a promise of his election program. “I dissolve the Verkhovna Rada of the eighth convocation,” said the new head of state after taking the oath. “The deputies, you yourself appointed the inauguration on Monday, I see a plus in this,” Zelensky said before that. - This means that today there will be no parties, we will work. Therefore, I ask you to repeal the law on parliamentary immunity, to adopt a law on illegal enrichment. I also ask you to dismiss the head of the security service and the minister of defense. You will have two months for this. Do it and hang your own medals”.