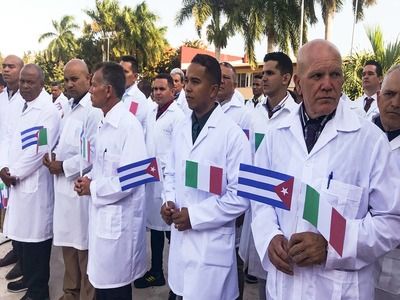 Venezuela: Trump Criticizes WHO for Diverting Attention from US Pandemic

WorldInterstate relationsMinistries and departmentsPublic health
OREANDA-NEWS. US President Donald Trump criticizes the work of the World Health Organization (WHO) in order to evade responsibility to its own citizens for Washington's inability to cope with the spread of coronavirus domestically. The corresponding statement was published on Wednesday by the Venezuelan Foreign Ministry.

"The irresponsible statements and actions of the President of the United States, as well as the campaign against WHO Director-General Tedros Adanom Gebreyesus, are Trump's new attempt to evade his responsibility as head of state, which recorded the largest number of infected with coronavirus-caused COVID-19 disease and an unfortunate high number of deaths We acknowledge the work of WHO and Tedros Adanom Gebreyesus, who from the very beginning urged world leaders to take the most stringent measures to stop the panda mission", the document says.

On Tuesday, Trump criticized WHO’s response to the pandemic, saying the organization is "funded primarily by the United States, but focuses on China". Later, at a briefing for journalists at the White House, the president emphasized that Washington was considering suspending contributions to the WHO budget.
Source: OREANDA-NEWS
Материалы по теме: