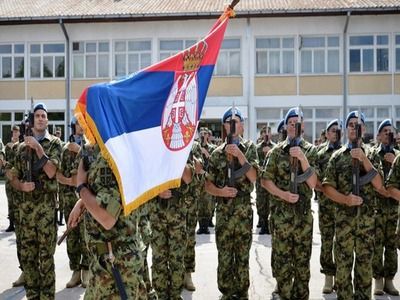 WorldInterstate relationsInternational activitiesMilitary security
OREANDA-NEWS. Serbian President Alexander Vucic ordered the Armed Forces of the country and the special forces of the Ministry of Internal Affairs to be brought to full alert, according to national television. This happened after the incident in Kosovo: on Tuesday morning, in the north of the self-proclaimed republic, according to preliminary data, 13 Serbs were detained.

"ROSU units (special forces of the Kosovo Ministry of Internal Affairs) invaded the territory of all four Serbian municipalities in the north of Kosovo. Kosovo police officers of Serbian nationality and civilians were detained," the television channel reported.

It is added that in the municipality of Zubin Potok and the northern part of Kosovska Mitrovica, local residents are building barricades in the streets to prevent the Kosovo authorities from interfering with the machines. Belgrade stressed that they have already been informed by the international community about what is happening. "If the Pristina campaign is not stopped, there is no doubt what the reaction of Serbia will be in the afternoon," they added. On the eve, Vučić addressed the parliament with an appeal “to stop deceiving the public” and admit the loss of Kosovo. He also spoke in favor of improving relations with Pristina. At the same time, the Serbian leader noted that in the “coming days or months” we can expect violent actions by the Albanians.

In 1999, the armed confrontation of the Albanian separatists from the Kosovo Liberation Army and the Serbian army and police led to the bombing of Yugoslavia (at that time consisting of Serbia and Montenegro) by NATO forces. Later, the European Union was forced to begin negotiations on the normalization of relations with Kosovo Albanians. Now the dialogue is suspended.
Source: OREANDA-NEWS
Поделиться в соцсетях:
Подписаться на наши группы: Instagram | VK | Facebook | Twitter
Rate this article: