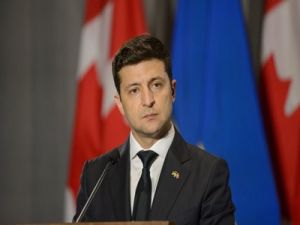 OREANDA-NEWS. President of Ukraine Vladimir Zelensky wrote on Facebook that the condition for Russia’s return to the G8 is the transfer of Crimea, the release of Ukrainian political prisoners and arrested sailors, and the cessation of hostilities in the Donbass.

“The return of occupied Crimea, the cessation of hostilities in the Donbass and the release of more than 100 political and Ukrainian sailors held by the Kremlin will be a really serious signal to the world that Russia is ready to take its place on the agenda of high diplomacy”, Zelensky said. According to him, since March 2014, when Russia's membership in the G8 was suspended, the situation hasn't changed - Crimea hasn't returned to Ukraine, and fighting is still going on in the Donbass.

The G8 format has existed since 1998, the G8 included Russia, the UK, Germany, Italy, Canada, the USA, France and Japan. After the annexation of Crimea in 2014, Western countries announced the termination of their participation in the G8 and the transition to the G7 format, with the same composition, with the exception of Russia.

On August 21, CNN reported, citing a source, that French President Emmanuel Macron phoned U.S. leader Donald Trump and offered to invite Russia to the G7 summit in 2020. Officially, this information hasn't been confirmed. Trump himself has previously spoken out in support of Russia's return to the G8. Macron later called the return to the G8 format a mistake, noting that Russia's invitation to the summit could be seen as a sign of weakness. At the same time, he allowed the country to return to the international club in the future.

British Prime Minister Boris Johnson said it was premature to invite Russia to the summit, he recalled the poisoning of ex-State Intelligence Agency employee Sergei Skripal and his daughter Julia in Salisbury, of which London accused Moscow. The British authorities said that the novice “Novichok” was used for the attack, the Russian side denies all charges.