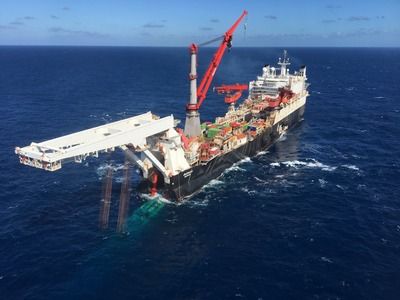 Fuel and energyOilgasInternational activities
OREANDA-NEWS. Wintershall Noordzee B.V., a joint venture of Gazprom EP International and Wintershall Dea, began offshore gas production in the southern North Sea. This was announced on Thursday by the press service of Wintershall.

"Wintershall Noordzee B.V. has successfully begun gas production at the Sillimanite field", the company said in a press release. It's noted that the field discovered in 2015 is located 200 km from the city of Den Helder in the north of the Netherlands, from where remote monitoring of production will be carried out.

“The first gas production at Sillimanite once again demonstrates our ability to successfully conduct hydrocarbon exploration and projects from the development stage to production. The Sillimanite project will increase gas production in Europe and strengthen the position of Wintershall Dea as Europe’s largest independent gas company and oil", said Hugo Dijgraf, chief technology officer and board member of Wintershall Dea, whose words appear in the message.

In addition to Sillimanite, opened in 2015, Wintershall Noordzee plans to invest in other projects in the southern North Sea. Gazprom EP International is a specialized company of PJSC Gazprom for the implementation of upstream projects outside the Russian Federation.
Source: OREANDA-NEWS
Материалы по теме: