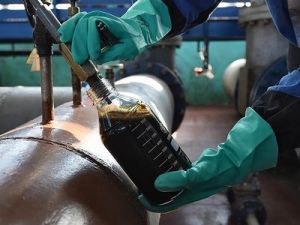 OREANDA-NEWS. Gazprom Neft didn't receive complaints from oil buyers due to an emergency at the Druzhbe pipeline, but the company initially had fairly small volumes of contaminated oil. This was reported to reporters by the head of the company Alexander Dyukov. "No, but in principle this oil - let’s say, there is little problem oil - it’s practically nonexistent", he said.

In April, the Druzhba oil pipeline, through which European oil is exported from Russia through Belarus, was contaminated with chlorides. After this, pumping was temporarily stopped. Organochlorine contamination can lead to equipment failure at refineries and threatens pipe corrosion. In May, deliveries by Friendship resumed.

Currently, Transneft is discussing with partners compensation for damage due to oil pollution. In July, the company's board of directors approved the maximum amount of compensation to shippers for oil pollution - $ 15 per barrel. Transneft also noted that the compensation settlement mechanism would be common to all shippers. According to investigators, oil pollution in the Druzhba pipeline occurred through the private Samaratransneft-terminal, which receives raw materials from several small producers.