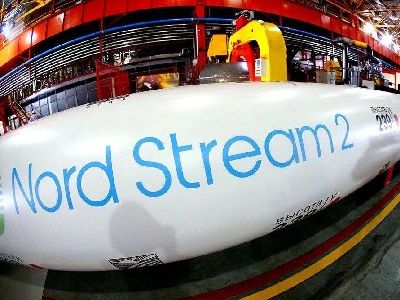 OREANDA-NEWS“Nord Stream-2” AG is the operator of the “Nord Stream-2”. The company is negotiating to raise €6 billion in project financing, financial Director of thecompany Paul Corcoran told this information.

"We are still negotiating with export credit agencies. We expect to attract about €6 billion," he said.
Corcoran did not name the company's budget for the current year.

"Nord stream 2" is the two strands of the gas pipeline that will pass through the Baltic sea and connect Russia and Germany. The second "stream" isplanned to be built next to the existing "North stream".

The dynamic positioning pipe laying vessel Pioneering Spirit has joined a fleet of vessels to lay the Nord stream 2 gas pipeline in the exclusive economic zone (EEZ) of Finland on December, 26.

United States Ambassador to Germany Richard Grenell threatened in January sanctions against German companies that are involved in the creation of the "Nord stream 2". Germany stated that attempts to regulate the “Nord stream-2” project were contrary to European and international law.

Earlier was reported that the construction of the "Nord stream-2" gas pipeline is supported by 73% of Germans. According to the publication, 73% ofrespondents were positive about the highway construction project, and only 16% of respondents believe that it is possible to do without it. At the same time, 90% of the participants in the social survey believe that the US President Donald Trump is trying to force Germany and other European countries tobuy American liquefied gas, hiding behind political motives.

The construction of “Nord stream -2” is also opposed by the Baltic States, Poland and Ukraine, which is afraid of losses associated with gas transit. In turn, Washington, pursuing its interests, urged Europe to abandon the gas pipeline, threatening sanctions to companies involved in the project.