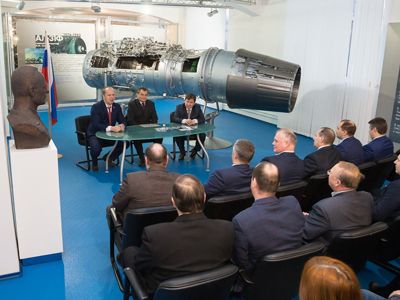 OREANDA-NEWS. On January 12, 2017 Aleksei Ovchinin, a test cosmonaut of the Roscosmoc cosmonaut corps, visited NPO Saturn. Our Rybinsk townsman, the 120th cosmonaut of the USSR/Russia, the 547th world cosmonaut, a participant of the space flights ISS-47/ISS-48 in 2016 visited the production and test shops of the company and met some Saturn representatives in the enterprise's exhibition hall (museum).

"Dear fellow townspeople, glorious Rybinsk engine builders! Just a few years ago I could not even fancy that I would have the opportunity to congratulate one of the country's largest engine building enterprises NPO Saturn on its 100th anniversary from space heights. That is the company I am tightly linked with through lots of events that have taken place in my life since the very childhood, the company where my both parents worked for a long time and that now employs my friends and acquaintances.  That is why I also have the right to consider myself to be a fosterling of NPO Saturn to some extent, - Aleksei Ovchinin said in June2016 in his printed and video messages to NPO Saturn employees from the board of the International Space Station. When being here on Earth within the walls of the Rybinsk engine building company, Aleksei Obchinin handed over to the NPO Saturn people the original congratulatory address dedicated to the 100th anniversary of NPO Saturn PJSC from the ISS crewmen, some souvenirs, and pictures from space and wrote an entry to the Distinguished visitors' book: "Thank you a lot for the wonderful tour of NPO Saturn's shops and museum! It was very interesting for me to see everything myself. I wish NPO Saturn prosperity, welfare, and new challenging projects!" Face-to-face communication and a commemorative picture became a real present for all the attendees of the meeting.

Aleksei N. Ovchinin is not the first "space guest" at NPO Saturn. During the Soviet years flight-cosmonauts were frequent guests of industrial plants' work collectives. For example, Gennady M. Strekalov and Andrian G. Nikolaev came to the Rybinsk plant. In recent years Valentina V. Tereshkova has visited the company more than once. With the support of the legendary Yaroslavl citizen, five representatives of NPO Saturn went to the Baikonur Cosmodrome in October 2016 where they witnessed a launch of the SOYUZ spacecraft.

Research and production association Saturn [NPO Saturn] (PJSC) is an engine-manufacturing company specialized in the design and development, production and after-market support of gas turbine engines for military and commercial aviation, power generation and gas compression as well as for ships and vessels. NPO Saturn is part of United Engine Corporation (JSC) and is the leader of the Commercial Engines division, a business unit of UEC.
NPO Saturn is a member of Russia’s Mechanical Engineers Union, an All-Russian industrial association of employers. The Yaroslavl regional division of the All-Russian public organization ‘Russia’s Mechanical Engineers Union’ is headed by Viktor A. Polyakov, Managing Director of NPO Saturn.

United Engine Corporation (JSC) (a Rostec State Corporation company) is an integrated organization specialized in the design and development, serial production and after-market support of engines for military and commercial aviation, space programs, the Navy as well as for the oil and gas industry and power generation. One of UEC’s prioritized fields of activity is the implementation of comprehensive programs of development of the industry’s companies by introducing new technologies meeting the world-class standards. In 2014 revenues of the corporation amounted to RUB 199.9 billion.

Rostec State Corporation is a Russian corporation established in 2007 in order to facilitate the development, manufacturing and export of high-technology industrial products of military and commercial application. The corporation comprises 663 companies, which form 9 defense-industrial and 6 civil industry holdings as well as 32 direct control companies. The Rostec portfolio spans such renowned brands as AVTOVAZ, KAMAZ, Russian Helicopters, VSMPO-AVISMA and others. Rostec’s subsidiaries are located in 60 regions of Russia and deliver their products to over 70 countries worldwide.