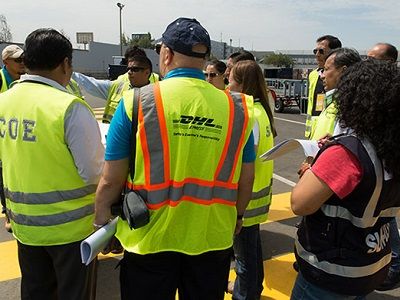 OREANDA-NEWS. Within 48 hours after a 7.8-magnitude earthquake struck Nepal in April 2015, the country's main airport was flooded with humanitarian aid supplies and rescue and relief teams coming in from all around the world. However, about a week later, large aircrafts were unable to land at the airport as the runway was damaged from the influx of flights delivering aid.

Airports play a critical role in channeling humanitarian teams and relief goods quickly after a disaster strikes. Besides having the necessary infrastructure to smoothly deliver the lifesaving support to the affected communities, the team on site needs to be trained in the necessary protocols and know-how to handle the dramatic rise in air traffic and flow of goods and people following a natural disaster. The 2015 earthquakes have shown that adequate level of infrastructure and effective logistical operations would not only save lives but help reduce economic loss.

Keeping this fresh lesson in mind, Nepal's airport authorities, representatives from the Home Ministry, the Nepal Army and other humanitarian responders have come together to assess and strengthen the post-disaster preparedness arrangements at two of Nepal's most strategic airports: Tribhuvan International Airport in Kathmandu and Nepalgunj Airport.

Participated by over 30 officials from government agencies and airports, the four-day Get Airports Ready for Disaster (GARD) workshops will be led by Deutsche Post DHL Group and the United Nations Development Programme (UNDP). During the workshops, the participants and trainers will evaluate the current level of preparedness at the two airports, go through trainings, provide concrete recommendations and an action plan to ensure that Nepal's airports are prepared for future disasters.

"The 2015 quake truly demonstrated the crucial role airports play in Nepal's national emergency response network," said Valerie Julliand, UNDP Resident Coordinator. "We just can't wait for another disaster to strike to have strong and effective contingency plans to manage the flow of emergency relief goods to the people in need. The GARD workshop is a key milestone in UNDP's efforts to support the government in making Nepal a disaster-resilient country and the airports ready to implement immediate response actions in the event of a disaster."

Being a landlocked country with a mountainous geography, Nepal relies heavily on air routes to transport aid and supplies during times of emergency. As part of the current GARD workshops, Deutsche Post DHL Group's aviation experts and UNDP leaders will be equipping participants with best-practice logistics management during natural disasters, before working with them to devise customized disaster-response plans for both airports. The workshops will also raise awareness of Disaster Risk Reduction and identify priorities for investment in national infrastructure that could further improve the resilience of emergency supply chains during a disaster.

"A clear and flexible action plan can help airport operators to minimize logistics bottlenecks and better manage sudden influxes of relief aid, bulky supplies like food, water and medical supplies, as well as NGO personnel entering the country," said Chris Weeks, Director of Humanitarian Affairs for DHL. "Almost two years since we first went into Nepal in the earthquake's aftermath, it's especially heartening to see the government and airports considering preparedness as paramount, and incorporating it into action plans that could potentially save more lives in the future."

"The 2015 earthquakes revealed that effectively channeling relief efforts from airports to affected communities require appropriate infrastructural capabilities and swift administrative procedures. In addition to reassessing the airport facilities and strengthening staff expertise, the workshop will lead to a series of follow-up activities including an action plan that we can run dry through simulation exercises," said Sudhir Kumar Chaudhary, Director of the Flight Operation Department at the Tribhuvan International Airport. "We are committed to working together with all emergency counterparts to follow up on implementation."

In 2009, GARD was developed by Deutsche Post DHL Group in cooperation with the United Nations Development Programme (UNDP) with the aim of preparing airports in disaster-prone areas to handle the surge of incoming relief goods after a natural disaster occurs. It also enables the various organizations and aid agencies to better understand the processes at the airport in the aftermath of a disaster, which will help facilitate relief efforts and enhance overall coordination.

To date, GARD workshops have been held at around 40 airports in Armenia, Bangladesh, the Dominican Republic, El Salvador, India, Indonesia, Jordan, Lebanon, Macedonia, Nepal, Panama, Peru, the Philippines, the Seychelles, Sri Lanka and Turkey.
GARD trainers and training materials are provided free-of-charge by Deutsche Post DHL Group while UNDP leads the project implementation and facilitates the coordination with the government authorities. GARD training workshop arrangements and logistics costs are fully covered by UNDP with funding contribution by the government of Germany.