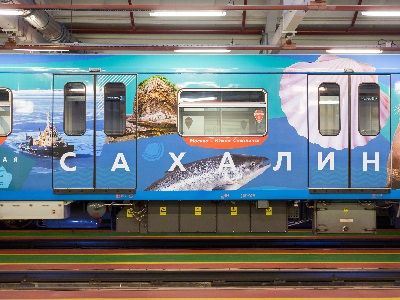 In the Moscow Metro Launched the Far East Express

OREANDA-NEWS The thematic train "Far East Express" was launched in the Moscow metro. The composition will run on the ring line.

"For the second time in Moscow, the far Eastern Express will start its journey, it lacks wagons of two regions, there should be 11 regions, but so far 9," said presidential Plenipotentiary envoy to the far East, Deputy Prime Minister Yuri Trutnev during the train launch ceremony.

He also noted that the Far East Region has created good conditions for investment, which is confirmed by the growth of investment in the region, "30% of all-Russian investments are attracted to the Far Eastern Federal District."

Each of the train wagons is divided into two thematic sections. Each of them symbolizes one of the regions of the Far Eastern Federal District, another wagon is dedicated to work and study in the far East.

According to the capital's metro, the new branded train will present the regions of the Far East and tell passengers about its unique natural places, wildlife, cities, historical attractions, as well as reveal the variety of tourist, cultural, gastronomic and educational opportunities in the region.

Head of sue "Moscow metro" Victor Kozlovsky thanked all the people who took part in the development of this train. "On the ring line we have 600 thousand people a day, they will be able to learn about the far East, not only read in the wagon, but also be able to download videos and additional information," he said.

"Far East Express" is an interactive train filled with online content. On the walls of each of the wagons there are QR-codes, passing through which passengers will be able to get additional information about the Far East, watch videos and participate in the photo contest, the press service reported.

Externally, the train is decorated in a contrasting style.